We describe a limb preserving osteotomy that restores foot position. Unlike conventional techniques, eg Blair fusion or total talectomy, we use a sloping cut to prevent excessive height loss during tibiotalar arthrodesis. 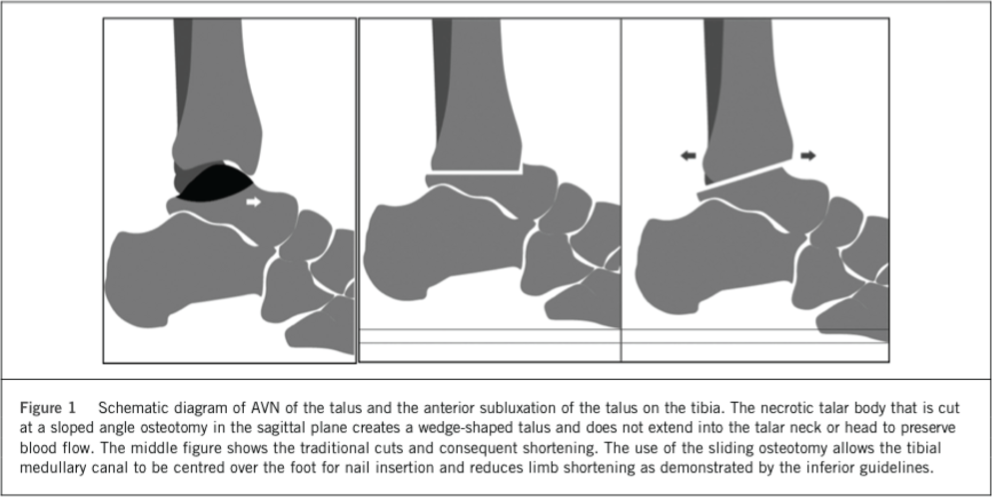 TECHNIQUE Talar body collapse leads to subluxation of the talus and clinical deformity.2 The extruded talus body should be debrided: removing necrotic bone and remaining cartilage. However, this may leave very little talar bone-stock and exposure of the subtalar joint (Fig 1). 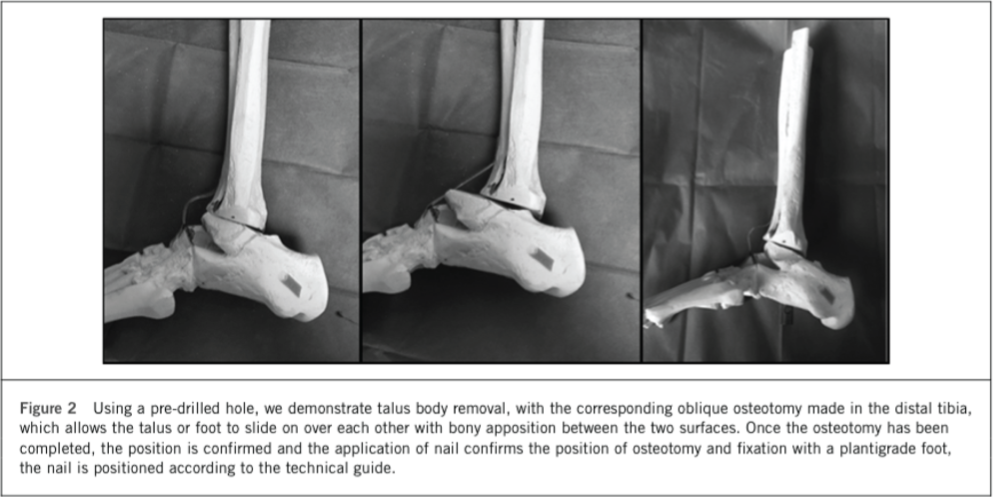 A sloped-sliding osteotomy of the talus in the sagittal plane creates a trapezoid-shaped fragment of talar head and neck. A corresponding parallel distal tibial osteotomy allows the talus to slide and dock on to the tibial plafond, restoring tibial-talar position with good bony apposition (Fig 1 and 2). Ensure that this cut does not extend beyond the talus body-neck junction to retain the hind-midfoot relationship, preventing excessive foot dorsiflexion. Coronal plane adjustments are made by resecting bone from the medial or lateral aspect of the talar body remnant. The tibiotalar/subtalar joints may then be fused using the surgeon's preferred method, eg hindfoot nail (Fig 3).

Figure 1 Schematic diagram of AVN of the talus and the anterior subluxation of the talus on the tibia. The necrotic talar body that is cut at a sloped angle osteotomy in the sagittal plane creates a wedge-shaped talus and does not extend into the talar neck or head to preserve blood flow. The middle figure shows the traditional cuts and consequent shortening. The use of the sliding osteotomy allows the tibial medullary canal to be centred over the foot for nail insertion and reduces limb shortening as demonstrated by the inferior guidelines.

Figure 3 An example of the use of the sliding osteotomy in a diabetic Charcot reconstruction, which is accompanied by long-segment fixation. Postoperative images show the cuts and stabilisation of the talus head and neck on the tibia with a solid union.

DISCUSSION The described sloped-sliding bi-planar cut of the diseased talus is a technique to prevent excessive loss of height at the tibial-talar apposition and correct any varus-valgus deformity. Limb-length discrepancies associated with traditional horizontal cuts may be reduced.

Figure 2 Using a pre-drilled hole, we demonstrate talus body removal, with the corresponding oblique osteotomy made in the distal tibia, which allows the talus or foot to slide on over each other with bony apposition between the two surfaces. Once the osteotomy has been completed, the position is confirmed and the application of nail confirms the position of osteotomy and fixation with a plantigrade foot, the nail is positioned according to the technical guide.